If Walls Could Speak... 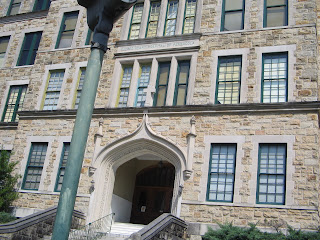 Yesterday, my older son was frustrated trying to gather research on his person and place for the ghost story he was writing for school.  He had to gather information about Stephen Mallory, a significant member of the Confederate army and the old Sacred Heart hospital on 12th avenue, a lovely gothic structure that has stood for over one hundred years.  Finally I told him, "Let's go do your research for real."  We loaded up the car and set out to visit the sites. 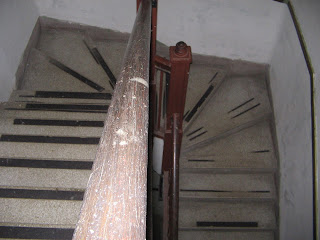 Upon arriving at the Sacred Heart hospital, we walked around, soaking in the architecture from outside and discussing the arches and other features.  However, when we went to enter the hospital, the front door was locked.  Undeterred, we walked around to the pizza place, Ozone,  which was open on the other side of the building, and used it as an entrance.  We then proceeded to walk around the three open floors, taking pictures picking up historical flyers, and looking at artifacts and photos from the old hospital.  As we left the hospital, still discussing it, almost to the car, I decided to throw in a tidbit I had read when we were researching on the internet. 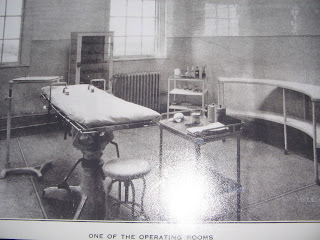 "Did you know what Ozone pizza used to be?"
"No, what was it?"
"That was the old morgue where all the bodies were kept...." 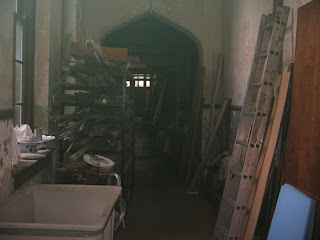 Suddenly, a sharp voice emanated from the building, "No, it wasn't!"
I sad, to the building, "But the research on the internet..."
"Was obviously a story put there by someone who thought it would sound good!  Ozone pizza is where the old hospital kitchens used to be.  They had two large tureens - one for soup and one for coffee.  The reason the walls are all tile was that it helped keep them clean when they were trying to prepare food for a hundred and fifty people."
As he talked, I finally located the elderly man, perched on the window sill, his head sticking partially out.
"How do you know?"
"We have all the old documents up here in the office."
"Could we come up and see them?"
"No."
"So how should we do research, if there are no books and the internet is wrong...?
"Check the East Hill Tower webpage."
"Well, we did, but there was not much historical information there."
"You're right."
"So then...?"
"You can e-mail me."  (Note that at no time was I given a name or anything else about the gentleman...)
"And you are..."
"On the webpage."
Apparently that was the end.  I thanked the bizarre apparition and we loaded into the car, moving on to the St. Michael's cemetary.  But for anyone who wants true information abut the old Sacred Heart Hospital, you should e-mail the elderly balding gentleman on the Tower East webpage....unless he is a ghost, of course.
Posted by Unknown at 9:12 AM